In his book Pillar of Celestial Fire (pages 158–168), Robert Cox outlines how each half-period of the precessional cycle may be divided into four yugas or ages. It says that they span a total of 12,000 years, and their periods display the relative ratios of 4:3:2:1. At the junction between ages there are shorter periods of transition, called sandhis. Their relative ratios correspond to those of the ages themselves.


On page 160 of The Pillar of Celestial Fire it says:


The four Ages described above pertain to the evolution of human civilization on Earth. There are much longer cycles that pertain to the evolution of the Galaxy as a whole. In accordance with the principle “as above, so below,” these longer cycles have the same names: Krita, Treta, Dwapara, and Kali, and display the same relative ratios of 4:3:2:1. However, each “year” in the larger cycle is a “celestial year” that is composed of 360 human years. The four celestial Yugas (not including their sandhi periods) thus span a total of 12,000 x 360 = 4,320,000 years.

Employing the information in the quote above, I've deviced the table below to demonstrate the resulting relationships between yugas and sandhis on a celestial scale, and their total span, from this perspective—given that the sandhi periods on a celestial scale have the same relation to their respective yugas as do their counterparts on a terrestrial scale.


In the book Hebrew Astrology the author Sepharial has presented another scale for the terrestrial yugas. It says on page 61:

Based on this I've made the tables to the right and below. 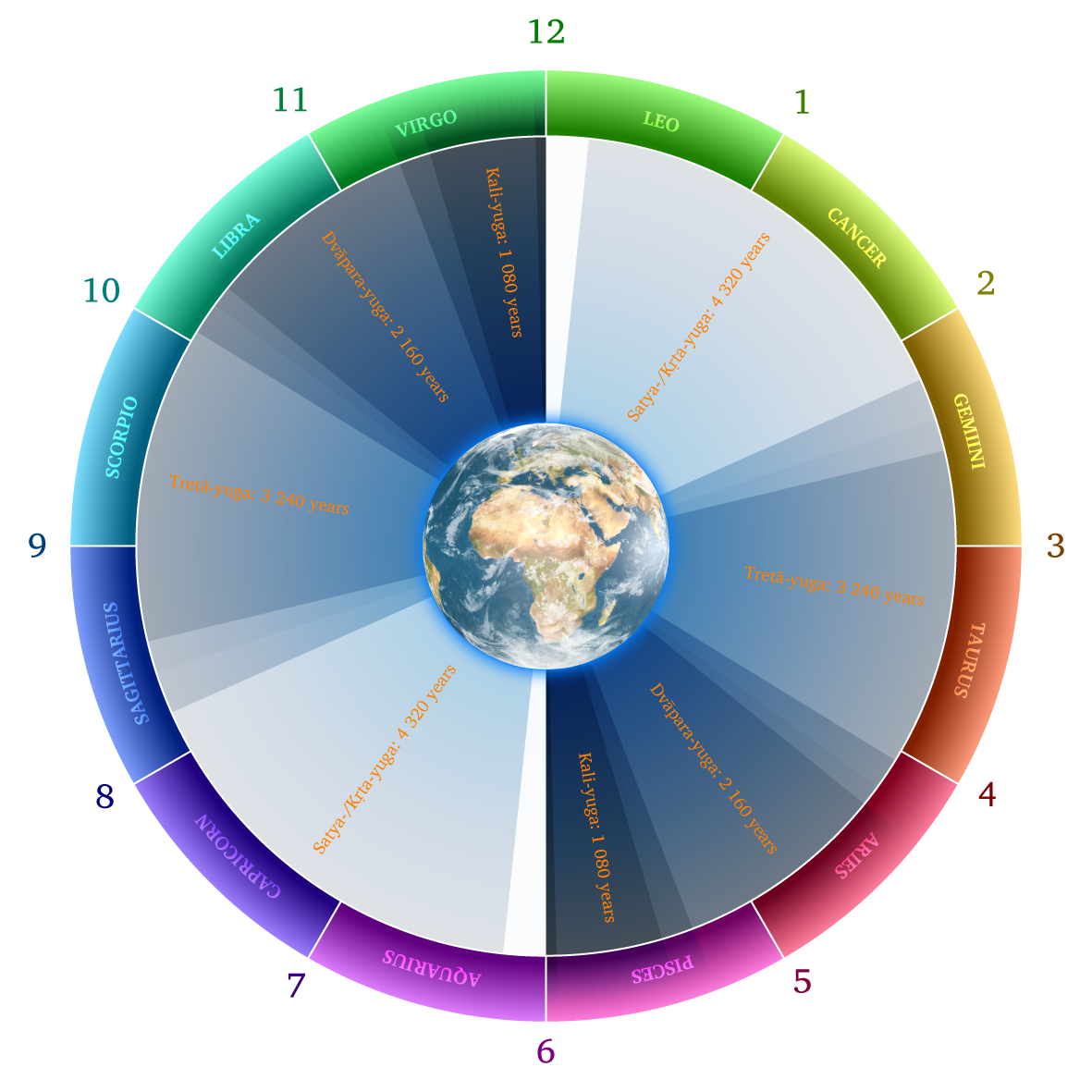 In the table above I show my new method of dividing the yugas. Instead of a single sandhi period between each yuga, I have included two junctional periods or twilight periods relative to each yuga; one before called sandhyā, and one after called sandhyānśa.
Traditionally though, it is the yugas of a larger scale which are most frequently mentioned. The total timespan of a ćaturyuga, comprising four yugas—on the larger scale—is described as concisting of 4 320 000 Earthly years. But rarely is it conveyed whether or not this number includes the junctional periods of sandhyā and sandhyānśa between the yugas. Taken that they should be included, I have made an alternative table below where I've multiplied each number in the top table with 333.333333∞ to arrive at the total span of 4 320 000 years.

But, tradition has it that 1 year of the gods—or devas and devīs—is equal to 30 × 12, or 360 Earthly years. By multiplying the numbers in the topmost table with 360, I get the table below showing another alternative for a timespan of the four Celestial yugas (version 2), which is the solution when the junctional periods are not included in the total timespan of a ćaturyuga of 4 320 000 years but are instead added to that number.


These six tables below and to the right are based on the quote in the left column, from the book Hebrew Astrology by Sepharial.